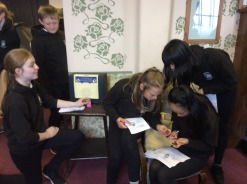 On Tuesday, we visited Edinburgh Castle as part of our World War II topic.

We visited a museum (schools only) that showed us about people of the war. We were told about an evacuee girl named Elise, a soldier named Kenneth, a prisoner of war named William and a woman of the war named Margaret.

We also went through several exhibits in the War Museum (for public) which showed us things such as artillery, a Nazi flag, gas masks, etc.

We really enjoyed it!